In this season’s Celebrity Apprentice, contestant and world renowned recording music artist Boy George selected Safe Kid’s Worldwide as his charitable organization. He became a break-out competitor and earned his spot in the season finale which aired last night. As a proud sponsor for Safe Kids since 2013, SANUS wanted to show our continued support to Boy George's efforts by presenting a donation on behalf of SANUS to support the fundraising efforts for Safe Kids in the final show. Because of non-disclosure agreements and uncertainty of what would make the airing we did not want to send out a communication prior to the episode airing.  However, we were pleasantly surprised and delighted that our very own Lauren Theobald was shown presenting Boy George with the donation contribution from SANUS in support of our awareness campaign to support TV safety. While Boy George was not this season’s winner, he was able to raise almost a half a million dollars to support Safe Kid’s efforts in preventing childhood injuries and deaths. We are so honored and thankful to have a partnership with such an amazing organization as Safe Kids.  Cheers to Boy George and cheers to Safe Kids. 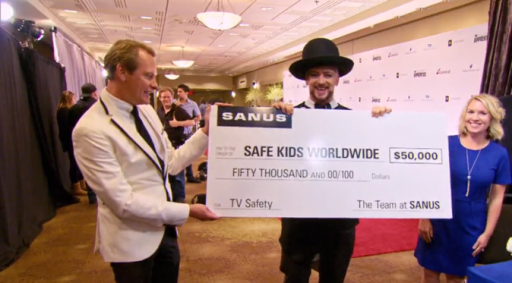 For more information on Safe Kids and their educational efforts to prevent TV and Furniture tip-overs, please visit  https://www.safekids.org/tv

To see the episode online, please go to... http://www.nbc.com/the-celebrity-apprentice/video/i-dont-have-time-for-anyones-ego-except-my-own/3467880